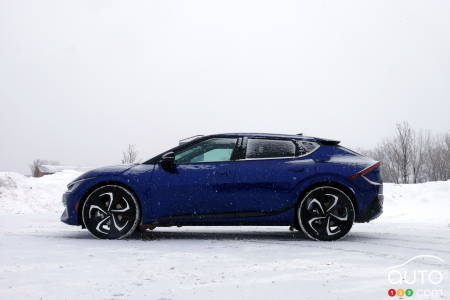 Day one in the new 2022 Kia EV6 wasn’t a washout. In fact it was more of a whiteout, as the snow came fast and heavy within an hour of us taking possession of the GT Line AWD version of the EV. It didn’t let up until evening. That did provide the opportunity to test out how the all-electric crossover handles itself in stark winter conditions – handily, it has a Snow drive mode – but really testing out its performance chops would have to wait for another day.

The sharp-looking, sharp-performing EV6 joins the VW ID.4, Ford Mustang Mach-E and fellow Hyundai Group product the Hyundai Ioniq 5 in the battle to win over buyers not already tethered to the Tesla brand. And maybe even some of those that are.

Shopicar.com, 100% online, shop for your next car, buy online and get it delivered to you anywhere in Quebec! 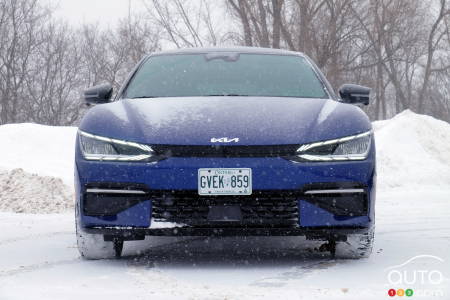 First thing to know about the Kia EV6 is that it’s a close cousin of the recently launched Ioniq 5, in fact most of the mechanical elements and powertrains are shared.

Second thing to know, and this is very apparent from the moment you first look at the EV6, is that the exteriors couldn’t be more different. The Ioniq 5 trades – very successfully, I should add – on the retro-futuristic appeal of a decades-old Hyundai concept. It’s like the vehicle of the future, as imagined by someone in the 1970s. I love it.

But I like the look of this EV6 just as much. Its’ is a more straightforwardly modern design, and there’s a definite resemblance to the Jaguar I-Pace EV here. That’s a good thing. The EV6 is long and squat like it thinks it’s a higher-clearance Porsche Panamera, and its front and back ends send a definite message that it’s a dynamic, sporty performer. Think of this: while in length it’s roughly the same as the VW ID.4, Mustang Mach-E and Ioniq 5, it’s less tall than all of those, by several centimeters. Sometimes I wish carmakers would just get over their fear of calling their products a car, like the term is a form of leprosy or something, because really this EV6 is a hatchback car. Isn’t honesty supposed to be the best policy? But anyways. 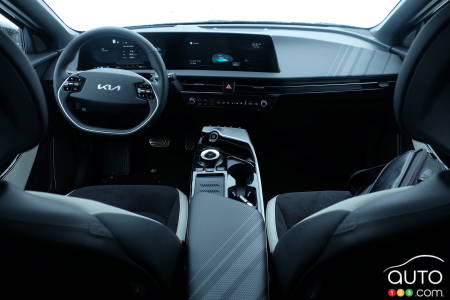 Inside
As it happens, I had occasion to sit down in the next-generation Kia Sportage SUV the same day I started driving the EV6, and found there the same multimedia system and even the same basic dashboard and console setup. So let’s say the interior environment is modern but not radically different from any other modern Kia product.

The console touch commands
One element that is unique, and poses a certain challenge to new users, is the horizontal row of commands on the console, below the main screen. You won’t see that row when you first get in the EV6, because it’s invisible. All you see is a black strip, bookended by two buttons. OK, so does that mean everything has to be done on the screen? 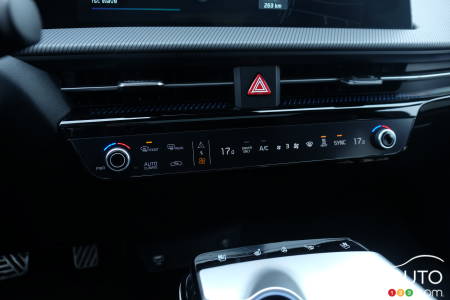 No. Because when you start ‘er up using the push-button start lower down on the console, that strip lights up and reveals touch-sensitive commands. Not only that, but there are TWO rows of commands, only one of which is visible at a time. To toggle between one row (for the audio system commands) and the other (for the climate controls), you have to swipe up or down on one particular command. Thus each spot on that strip and each of the two physical buttons do double duty.

Except that when you’re driving and paying attention to the road ahead and NOT paying attention to which row is in play, you’re going to do stuff like crank the heating up when you intended to increase the volume so you can hear the person you’re on the phone with. I did that more than once.

That bug aside, this is a comfortable interior, modern but not as disorienting as some of the other new EVs coming onto the market. The seats are great and can be adjusted easily for a good driving position, and the rear row with its flat floor provides a lot of room. There doesn’t seem to be much of a price being paid for the squashed, Jaguar I-Pace-like exterior silhouette of the EV6, and compliments to Kia’s designers for that.

As mentioned, there are a variety of similarities between this Kia and Hyundai’s EV, and so comparisons are impossible to avoid. For instance, whereas the Ioniq 5 we drove came with an optional panoramic roof that is not openable but provides an incredibly airy, open-feeling interior space, particularly in back, the EV6 comes with a standard-issue power sunroof. Which means that when luxuriating in the roomy, comfortable back seat, you don’t have the same sense of open sky above you. On the other hand, you can open that sunroof, unlike in the 5. 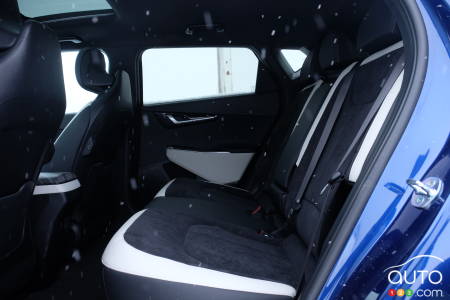 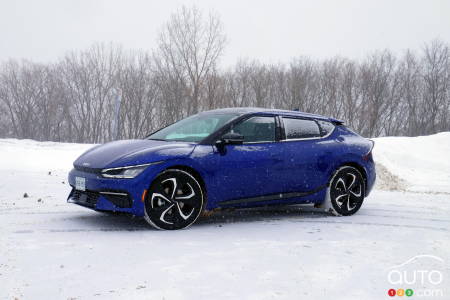 Performance
The EV6 is the very first new vehicle produced by Kia since its big re-branding last year, and the first dedicated battery-electric model based on the automaker’s all-new Electric-Global Modular Platform (E-GMP). What that means is that the vehicle is conceived from the ground up as an EV, and that is a substantial advantage, both in terms of design and ergonomics but also of performance.

The EV6 is thus a properly low-centre-of-gravity vehicle, solid and nimble on the road and strong in accelerations – especially off the line – with little-to-no-roll on curves, which it can engage at decent speed with confidence. Also, while it looks almost like a vervy hot hatch from some angles, it actually has a wheelbase equal to that of the Telluride midsize SUV. Rest assured, that’s about all there is in common between those two models, other than the new Kia logo. No wait, there’s the steering, a little on the light side like in the SUV; but that’s a very common curse of contemporary vehicles, so it’s hard to point the finger just at the EV6. Just don’t expect intimate conversations between the road surface and your hands.

The package of performance this Kia puts together is impressive indeed, and it almost – almost – made us forget about the 576 hp that’s on the way later on in the form of the GT trim. That will surely be a barn-burner on the road, and we can’t wait to try it.

For the record, the GT-Line AWD variant we drove offers an output of 320 hp and 446 lb-ft of torque. 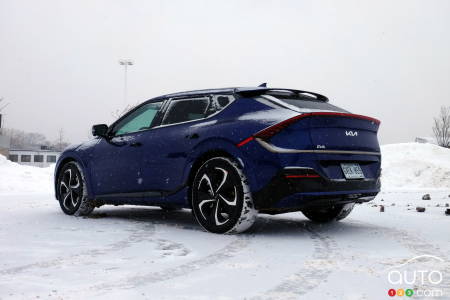 The Kia EV6 gives drivers the choice of several drive modes – Eco, Normal, Sport and Snow. We tried the first for a short stretch and found that while it’s fine for going from light to light in the city, trying to do highway driving in it felt like the vehicle was pulling an open parachute. Switching back to Normal cut that ‘chute off, and Sport sends you back a bit into your seat. The choice is yours, but I suspect most won’t go near Eco mode unless they’re getting dangerously low on remaining km and have to limp home or to a charging station. The Snow mode, by the way, locks in a 50/50 torque split for traction and reduces the regenerative braking.

Speaking of which, like in the Ioniq 5, here you have a choice of levels for your regenerative braking (which returns a bit of juice to the battery pack) from none to Max, which effectively becomes one-pedal driving. Again, the choice is yours. The level is set by using the paddle shifters on back of the steering wheel. 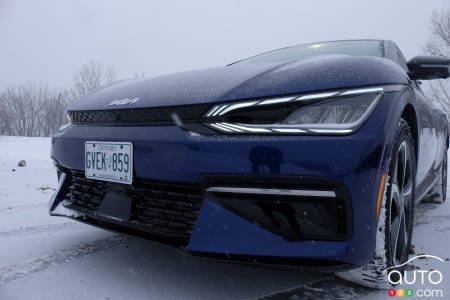 The last word
The Kia EV6 was just named Car of the Year by the folks who know these things over in Europe, and it’s hard to argue with their choice. This is an extremely well-put-together car-I-mean-crossover, and it delivers really positive driving dynamics and a comfortable, modern but not overly pretentious interior to enjoy those in. And on top of it all, it looks really great from the outside, smartly taking inspiration from the likes of the Jaguar I-Pace and Porsche Panamera.

One bit of feedback I did hear was that the rear row of seats was not quite up to expectations in terms of the space it offers, which puts in doubt its practicality as a small-family crossover. Now, that second row is by no means cramped, but here’s one area where the EV6 suffers slightly compared to the Ioniq 5 and its higher ceiling and panoramic roof and more-minimalist interior.

To put much too simplistic a point on it, families may thus end up going more for the Hyundai, while those EV buyers wanting a sportier, tech-ier experience will gravitate to the Kia. In a way that’s silly, because both are dynamic and both are roomy, but sometimes buying choices come down to that. Especially when you have two vehicles that otherwise share so many elements.

The absolute great news of course is that the market now has two excellent new all-electric choices, both of which qualify for federal and provincial government EV incentives.

See also: Kia EV6 Official Range Figures Are In, and They Vary Between 373 and 499 km 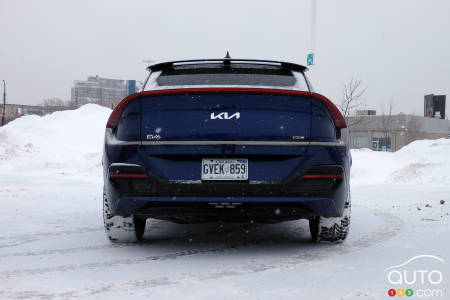 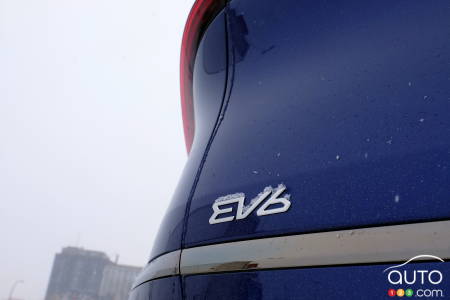