Ever since it debuted for the 2015 model year, the Lexus NX has had a pretty challenged existence. Not because of the segment in which it competes, necessarily – the compact luxury crossover segment is always looking for more models – but rather because it has struggled to escape the shadow of its bigger brother.

Yes, the NX exists alongside the Lexus RX, one of the pioneers of the luxury-SUV segment and a huge seller for Lexus. The NX wasn’t that much smaller when it debuted and didn’t look that different, and while it did cost about $10,000 less at base than an RX, the latter was and is so good that you knew people would find a way to afford one if they could. And they did, about 3,000 times more in Canada for 2021 than they did for the NX.

But, there’s a new NX here now, and it comes to us as the RX is getting long in the tooth.

For 2022, the NX has been given new fascia both front and rear, a vastly re-designed interior and specifically for the purposes of this review, a plug-in hybrid (PHEV) model to go along with the hybrid seen previously. That’s why there’s a “+” in my tester’s model name, the “+” referring to the owner’s ability to plug in and charge the vehicle for full EV driving over a claimed 61 km. There is no “non +” 450h, though, so argue amongst yourselves if the “+” sign is redundant or no.

Browse cars for sale available near you All fresh and new
While the latest NX still gets the big hourglass grille emblazoned with the traditional Lexus L badge, there are new headlights that now house the DRLs and headlights under the same lens, new foglights and a clamshell hood, plus different wing mirror design and a more tailored look overall. My car’s Executive Package, meanwhile, adds tri-beam auto-levelling LED headlights and special 20-inch wheels.

The rear fascia, however, gets perhaps the biggest change, although it’s more about what it’s lost that what it’s gained: that Lexus badge we were talking about? Nowhere to be found on the rear deck, where it’s replaced by large LEXUS scripting, in keeping with a popular trend seen in the crossover world these days. It’s complimented by a full-width taillight bar that provides a lower, wider look overall. The exterior styling changes aren’t massive, but they have made the NX the most modern-looking Lexus this side of the LC sports car. A modern interior
Inside, more radical changes as the new NX welcomes a new Lexus infotainment system – dubbed “Lexus Interface”. Let’s say the brand needed this like the Leafs need a Cup. Or even just a playoff series win.

Gone is the fiddly, works-but-only-sort-of touchpad-slash-cursor system, replaced by a touchscreen interface. And what a screen! The new graphics and OS are great (and the processing power is five times faster than previous, according to Lexus) but just look at the size of the thing! That’s an optional 14 inches of swept area (up from 9.8-inch as standard), and it sits closer and angled towards the driver unlike before, when the widescreen display sat too far and too high on the dash to comfortably reach from the driver’s seat. It was never as bad here as it was in the RX, but either way, it’s much better now.

It’s also Apple CarPlay and Android Auto compatible, both interfaces available via wireless, and both spanning the entirety of the display. Even though the apps take up that much space, the climate controls remain, made up of a combination of a touch interface and traditional dials. Even the dials, though, get a digital display within them to better integrate them with their surroundings. If you want more than just the basic temperature, heated/cooled seats and heated steering wheel controls, there’s a sub-menu, accessed via swiping up from the base of the display, that provides more in-depth controls such as an eco climate setting. It’s all good, but I think a couple of buttons either side of the volume knob below all that for your seek/skip controls would be nice. Other displays include a digital rear-view mirror (important in smaller vehicles so tall rear passengers or loads don’t obstruct your rear outward visibility) and heads-up display.

Which brings us to a bit of a curiosity when it comes to the NX.

Other slight interior issues include the lack of the optional full-length moonroof seen in other NX models (so that’s a “-“ for the “+”, then) as it would add too much weight to a vehicle already weighed down by a heavy hybrid system and some slightly weird control placement. For example, when I first stepped in, it took me a good two minutes to find the engine on/off button, and I repeatedly reached for the left-most climate knob instead of the actual on/off button. The electronic door releases – both inside and out — took some getting used to as well. Interior space is good both front and back, but it’s especially ample in back, since the lack of the full-length moonroof does mean more rear headroom. The seats are comfortable – as you’d expect from Lexus – and there’s no less passenger space in the PHEV than there is in other NX models.

I’m also rather a fan of the virtual assistant you get, which allows commands ranging from turning up the heat to finding the nearest sushi joint. Another cool feature is how you can have the navigation system automatically send an ETA message to whomever you’re on your way to visit, as long as their contact info is in your paired device. The system also recognizes a multitude of accents and can tell whether it’s the front passenger or driver issuing commands.

The electric part
While the manufacturer does claim 61 km on a full EV charge, the most I saw after a full charge was 57 km, which shrunk to about 51 km in real-world use after my test drive. A drive which, I grant you, took place over undulating mountain roads, clogged city streets and open, flat highway. Of course, I’ve driven most every NX-sized PHEV there is out there, and actually hitting an OEM’s claimed mileage figures is rarely realistic. Driving conditions are just never going to be that perfect. 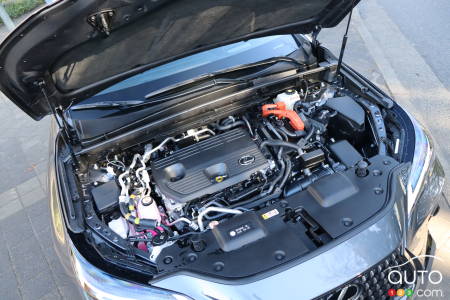 The NX does, however, make it nice and easy to get the most out of your range thanks to a button marked “HV-EV HOLD CHG”, mounted below the shift lever. It allows you to save your charge for later in your drive. Say you’re out on the highway when your gas engine – it’s a 2.5 4-cylinder, by the way – is at its most efficient, but you know you’ll be coming into traffic later – when your EV motor is ai its most efficient. You can save your charge for that time. There’s also a button marked “Auto EV/HV” which allows you to go the other way and force the vehicle to use its EV motor only.

Beyond that, it bears mentioning that the 450h+ shares its powertrain with the Toyota RAV4 Prime and that vehicle, believe it or not, is the second-fastest vehicle Toyota builds for Canada, sitting just below the GR Supra and above the GR 86. For the NX, what that translates to is 305 combined hp fed – immediately — to all four wheels through a CVT transmission. Thanks to its gas backup, it doesn’t run out of steam at speed, either. This is a small crossover that punches far above its weight when it comes to its powertrain.

Comfort? From a Lexus?
Of course, it is also a Lexus crossover, meaning it has to ride comfortably as well. This the 450+ does, even without the optional adaptive dampers you get with the F-Sport Series 3 package my car didn’t get. Bumps are swallowed up with gumption and body roll, dive and squat – even with the quick off-the-line speeds – are pleasantly reduced. Which is impressive, considering the NX’s short wheelbase and the fact that, once you get past its heft, the SUV can handle itself through bendier climes as well.

That’s fine, but the real take away for me was just how solid it felt in every situation. It takes the most severe road divots to shake its cowl in anyway, and that’s a big plus for a vehicle that, CUV or no, is going to be spending a lot of its time on pockmarked city streets. The last word
The NX is the first model to get redesigned in the “new Lexus” era (with the IS being more of a hefty refresh) and it’s a darn good starting point thanks to its great interior tech, easily manageable PHEV system and ultra-comfortable in-cabin and on-road experience. Sure, it may not have gone too far down the well styling-wise and there are a few interior bugaboos, but darned if the NX hasn’t fully, completely stepped out of the RX’s shadow. Job well done.