“If he had come to my house that night in a police car, I would have opened my door and welcomed him in, and I would probably have been dead”

As many as five fires set by a killer in the wooded community of Portapique drew a number of curious onlookers the night of April 18, 2020.

Among them was Autumn Doucette. She lived a short distance away at Five Houses and was concerned “the forest fire” might cross the Portapique River and reach her home or her mother’s house, also in Five Houses.

Doucette drove toward the fires and took photos with her phone; she later showed the photos to the RCMP, to a private investigator hired by families of the victims, and to investigators with the Mass Casualty Commission. Doucette’s photos and other information she supplied turned out to be useful in trying to establish a timeline and reconstruct the shooter’s movements during that terrible night.

Her first photo of the killer’s house at 200 Portapique Beach Road, time-stamped 10:56pm, shows a fire. Doucette’s second photo of the killer’s house snapped at 11:14pm shows the fire “phasing out” and “a full-on blaze” then underway at a home owned by John Zahl and Joanne Thomas located further down the same dirt road overlooking the Bay of Fundy.

The timing of those two photos corresponds with phone calls made to 911 by members of the Griffon family on Faris Lane — they reported hearing gunshots at 10:39pm as they stood outside their cottage watching a fire at the killer’s home and later, a fire that began at the Zahl/Thomas residence before they went inside at 11:15pm.

Doucette told investigators that her boyfriend heard several gunshots (which he initially mistook for fireworks) at about 10:20 while he was outside smoking. This was within a minute or two of when the killer fired two shots narrowly missing Andrew MacDonald, a neighbour who went out to check on one fire and discovered a second.

Autumn Doucette did not hear those gunshots. She was concerned the glow she could see in the sky toward Portapique was a forest fire. She called her son Dean Dillman, who works for the Department of Natural Resources, and he gathered his firefighting gear and jumped in his car. On the evening of April 18, both mother and son were driving around the Portapique area keeping an eye on several fires.

Dillman, who was driving a white Subaru, was watching from a vantage point at one end of the Brown Loop road where it connects to an unmarked road that crosses a blueberry field. He later estimated he sat there watching the fires from 10:45-10:55. His mother’s phone records show she spoke to him at 10:38 and again at 10:58, when he left the Brown Loop. 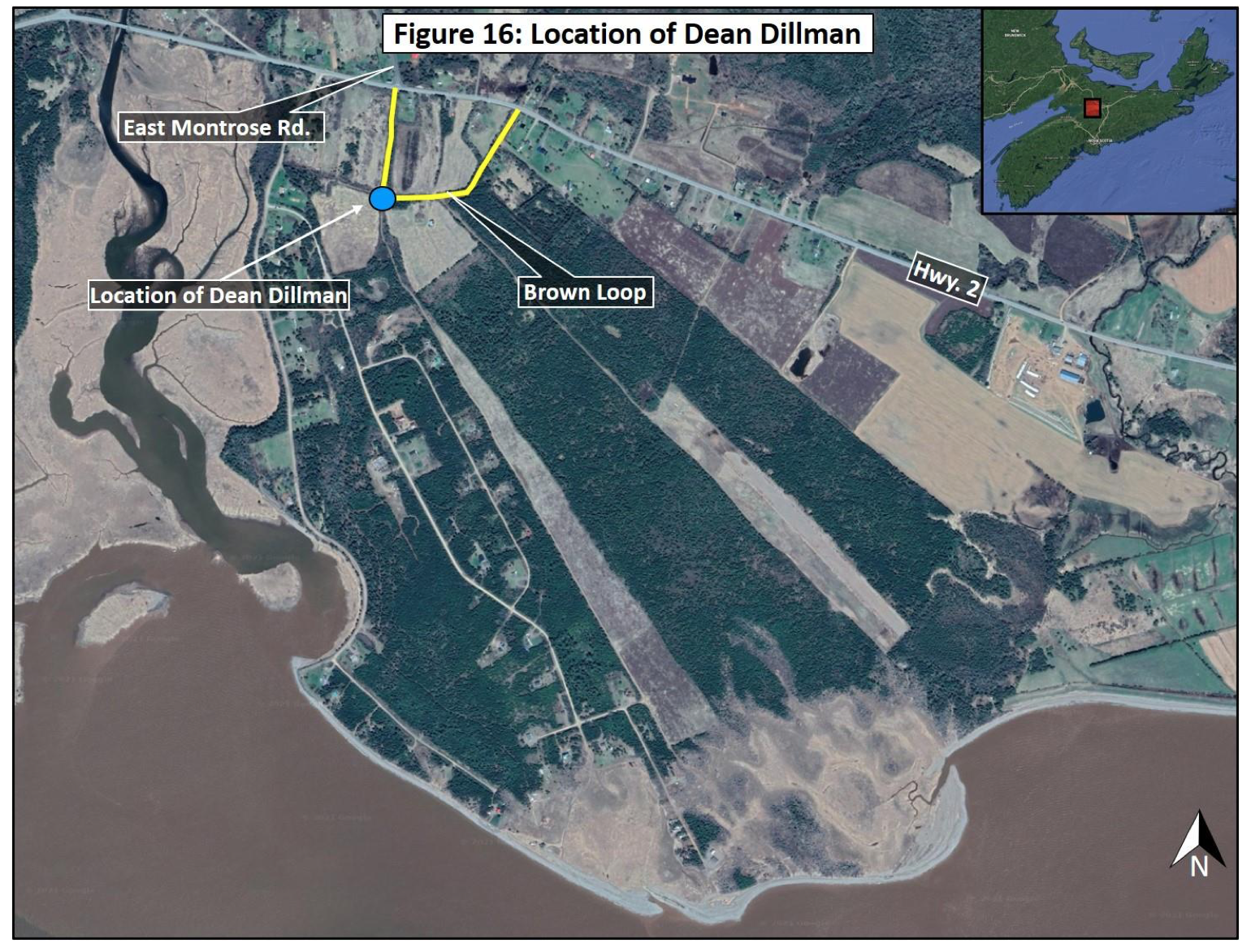 Dillman said he did not see a white car resembling a police car “zipping” along the Brown Loop, as reported to police by members of the Zimmerman family who placed that sighting between 10:33 and 10:45.

That is the route — across the blueberry field, northeast along the Brown Loop, and then out on Highway 2 heading north toward Great Village and Truro — that MCC investigators believe the killer may have used to evade police. If so, Dillman may have missed meeting the killer by mere minutes, according to the RCMP officer who took his statement.

“They told him he was a very lucky boy but because if he had have been there a couple minutes earlier, then he probably would not be alive right now,” said his mother. “And I think that is what haunts me the most….”

A video camera at the Wilson’s Gas Stop in Great Village appears to have caught a grainy image of a white car resembling a marked police vehicle passing by at 10:51. Investigators with the Mass Casualty Commission believe that was the fake police car driven by the shooter who, according to one theory, must have left the Portapique area before Dillman arrived at Brown Loop or else Dillman would have seen the vehicle. The trip from Brown Loop to Great Village is estimated to take no more than 5.5 minutes at a speed of 100 km per hour. Prior to 10:45, there were no roadblocks because all the first responders were parked at the top of Portapique Beach Road.

Spooked by a flashlight

Doucette told investigators she called her son at 10:38 because she got frightened “by someone with a flashlight in the woods” near the spot where she was in her car watching the fires. She was parked by a clump of trees she refers to as “Shady Nook.”

The person with the flashlight was probably Clinton Ellison, who was looking for his younger brother Corrie and fled into the woods after finding his body. Once she got home, Doucette called the RCMP to report the flashlight incident. The RCMP dispatcher told her to lock her doors and remain inside. Doucette said she did not recall being given any more information than that but by this time she was aware there could be “a shooter” or “shooting” taking place in the area.

Doucette said her son had reacted to seeing a Facebook post on his phone that mentioned a “shooter” or “shooting” in the area captured as a screenshot from an RCMP twitter feed. (In fact, the RCMP Twitter feed mentioned a “firearms complaint,” not a “shooter.”) This was around the time she was taking a second photo of the fire at 200 Portapique Beach Road, at 11:14. The reference on Facebook to a shooting convinced both mother and son it was time to head to their own homes.

The lead investigator for the MCC, Dwayne King, asked Doucette how she would describe the information provided by the RCMP through its Twitter feed. Doucette said she didn’t have Twitter on her phone Saturday night but she added the Twitter app to her phone early Sunday morning.

The first message the RCMP tweeted to the public was sent at 11:32pm on Saturday advising that the RCMP were at Portapique for a “firearms complaint” and asking the public to avoid the area and for residents to stay inside and lock their doors. The first time RCMP told residents and neighbours about an “active shooter” came via a tweet at 8:02am, which advised people in the area to stay inside and lock their doors. 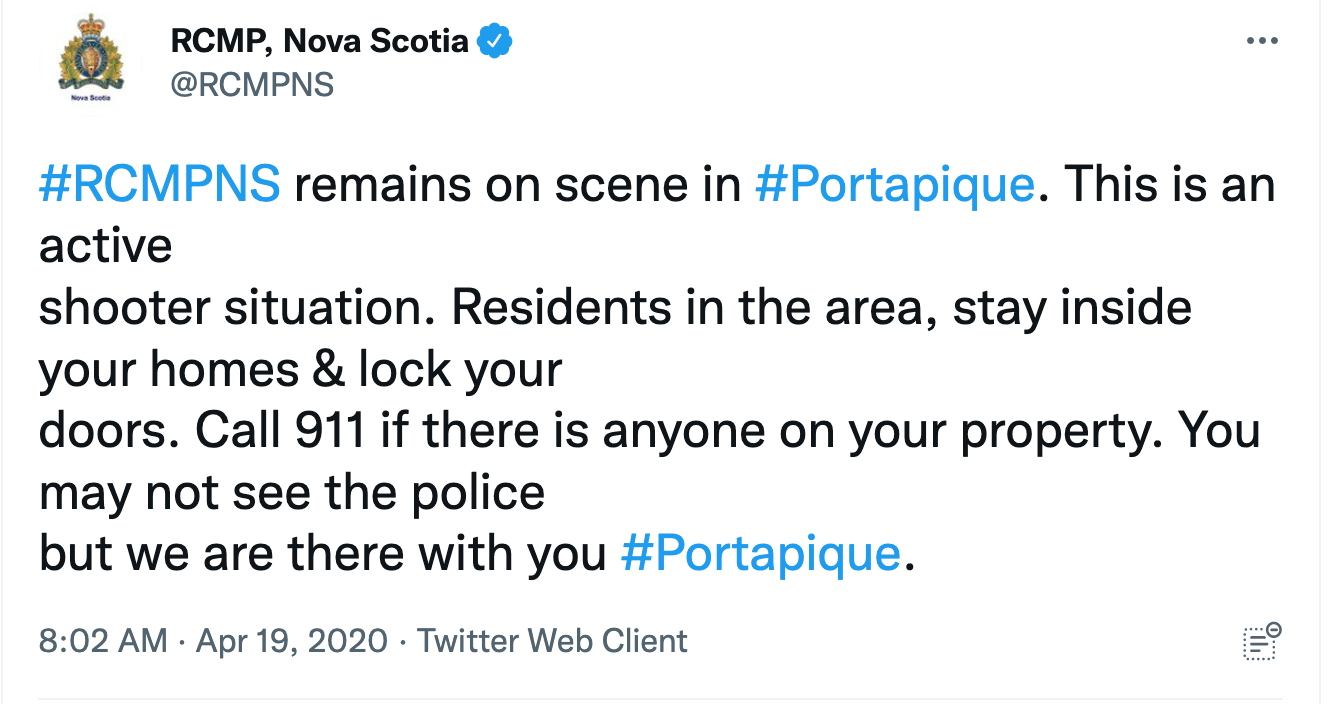 The RCMP’s second tweet about Portapique, at 8:02am Sunday.

“Vague, now that I look back and know more,” replied Doucette to King’s question about the RCMP information sent over Twitter. “Inaccurate; very inaccurate.”

“And why do you say that?” continued King.

“Because if he had come to my house that night in a police car, I would have opened my door and welcomed him in, and I would probably have been dead. Yeah. Because they knew he was driving a police car and it was Gabriel Wortman at 10 something that night, not the next morning. I heard all three 911 calls and all three of them identified him. And then they [the RCMP] said they didn’t know it was him until the next morning, 6:30am. And that’s disgusting, and I’m really angry about it.”

The three 911 calls she referred to came from Jamie Blair, the Blair and McCulley children, and Andrew and Kate MacDonald.

Doucette works at the Mi’kmaw Healing Centre, a shelter for women who have experienced domestic violence, located on the Millbrook First Nation, half a dozen kilometres south of Truro. She said although she has an excellent working relationship with RCMP officers stationed there, the manner in which RCMP leaders communicated with the public about what happened in Portapique that night means she no longer has faith in the police. That “trust has been broken,” she said.

In her statement to the MCC investigator, Doucette also said she heard a series of gunshots shortly after returning to her home at 11:25pm. That account appears to match up with reports from the first three officers on the scene as they were hearing gunfire as they were checking on the Blair and McCully children at 135 Orchard Beach Drive between 11:20 and 11:50.

It’s possible those sounds may have been explosions caused by the multiple fires. Doucette told investigators she didn’t sleep much that night and recalls hearing more gunshots at about 2:30am. That information is corroborated in Campbell’s court affidavit, in which he stated that “at 2:19am, more sounds of gunshots were reported in Portapique,” and at 2:50am, “ERT in Portapique report hearing a single shot from small arms fire.”

If so, those “shots” do not appear to be related to the crimes. Given the confusion and the fear, it’s possible shots were fired by people other than the perpetrator. Video surveillance cameras from the Debert Industrial Park indicate that by midnight the killer was parked in his car behind a welding shop.

Given the number of citizens drawn like moths to the flames from five separate fires burning in an area just 30 houses, it is frightening to consider that the toll of dead and injured could have been even higher had the onlookers crossed paths with the gunman.

We have many other subscription options available, or drop us a donation. Thanks!;