Drivers across the nation may prefer different vehicle types, but these ten cars have something to offer practically everyone on the road.

From SUVs to sedans, pickups to hatchbacks, Americans have no shortage of choices when it comes to picking their ideal vehicle. Whether they’re looking for ample cargo space, tight handling, or even a flashy paint job, customers can find just about any vehicle to suit their particular automotive needs.

There are some vehicle features, however, that everyone can appreciate. Fuel-efficiency and affordability never go out of style, especially as pandemic-induced supply chain disruptions have pushed the cost of both new and used cars skyward. A new vehicle is now 13% more expensive than the market average from just a year ago, while a pre-owned ride will set the average buyer back a whopping 27% more than it did at the beginning of 2021.

Curious to see how these trends have shaped consumer preferences, the research team at Insurify ran the numbers to identify the most popular vehicles in America in 2022. 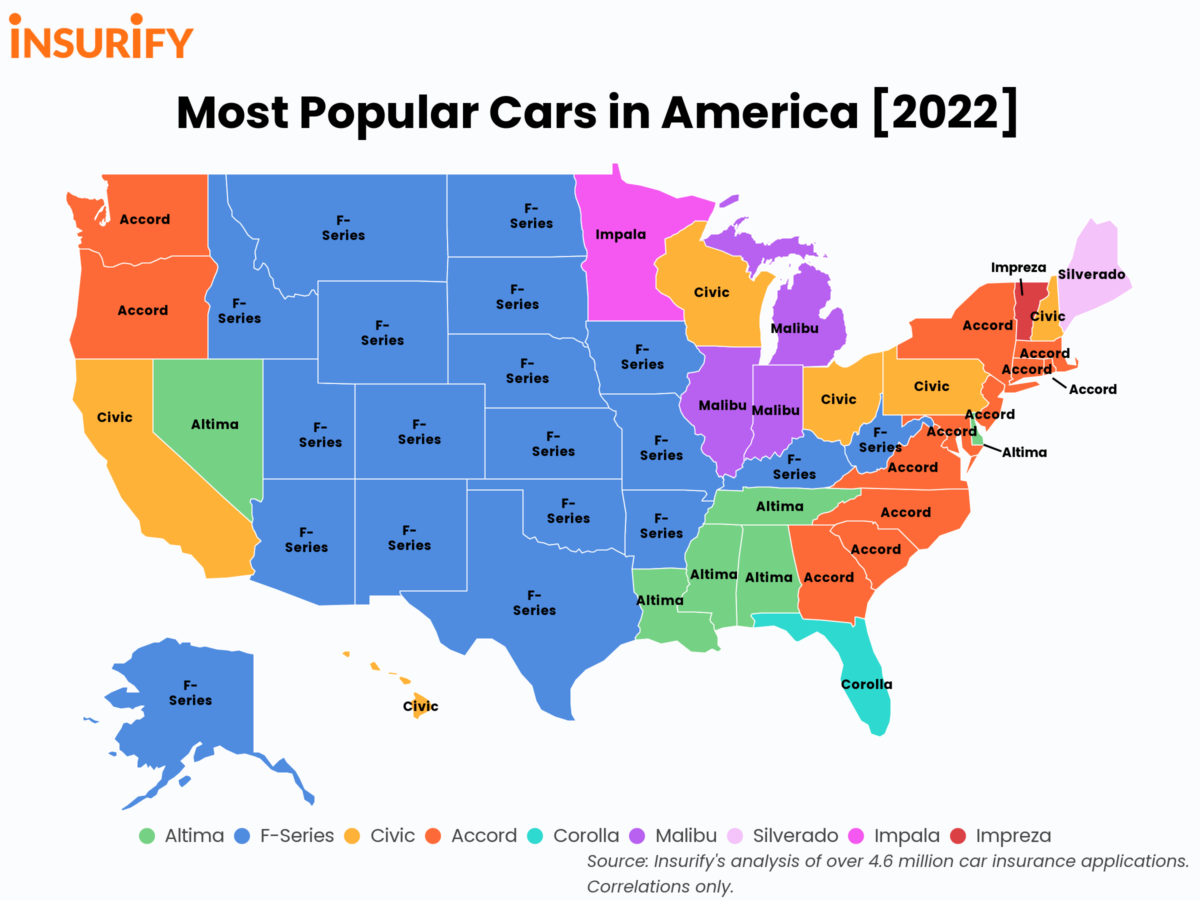 To determine the most popular vehicles in America, the research team at Insurify, a site to compare auto insurance rates , turned to their database of over 4.6 million car insurance applications. Applicants must disclose their driving history and information including the make and model of their vehicle and state of residence when applying for car insurance. Insurify’s data scientists ranked the ten most popular vehicles identifying the models with the highest total number of drivers across the  United States. The car models with the greatest number of drivers in each state were also named the most popular car for their respective states.

Insurify’s research team referred to each model’s respective manufacturers’ websites for MSRP and MPG. Data on the average price of a new car was gathered from Kelley Blue Book’s November 2021 car sales report.

The findings in this article represent statistical trends found in Insurify’s database of over 4.6 million car insurance applications. The findings of this study are not meant to imply the direction nor necessarily the existence of a causal relationship. Rather, this is a presentation of statistical correlations of public interest.

What’s the most popular car in America?

The Honda Accord is the most common car in America. Especially popular on both the East Coast and in the Pacific Northwest, Accords account for over 3% of all automobiles on the road in 2022.

The Hyundai Sonata offers comfort, style, and some of the best-in-class tech at a reasonable price  for a new car these days. Combine these factors with excellent fuel-efficiency, and it’s no surprise that the Sonata is Hyundai’s best-selling vehicle—and the tenth-most common car in the nation.

Though Ford discontinued the Fusion in 2020, the model still ranks among the top ten most popular cars in 2022. This speaks to the Fusion’s lasting appeal, driven by its inclusive pricing and handsome exterior. Even today, Fusions account for almost three out of every 200 cars on the road.

The Chevrolet Malibu has found a dedicated following among Midwestern drivers. While it may be only the eighth-most popular car nationally, it’s the most driven vehicle in Illinois, Indiana, and Michigan. Perhaps Midwestern motorists are drawn to the Malibu’s excellent fuel economy, or maybe they’re just showing support for the Detroit-based auto manufacturer. Whatever the reason, there’s no denying the Malibu’s widespread appeal.

The Silverado certainly offers different strengths than the Malibu, Chevrolet’s other car that made the list. But many drivers, especially those in more rural, snowy states like Maine, aren’t necessarily prioritizing fuel-efficiency. Rather, they need towing capacity, high ground clearance, and cargo space— and the Silverado checks all those boxes. Though it’s the most expensive car among the ten most popular vehicles in the country, its functionality makes the extra cost worth it to many drivers.

More than one out of every fifty cars in America are Toyota Corollas, and it’s even the most common vehicle in all of Florida. The Corolla boasts the lowest MSRP of any car among the country’s top ten most popular vehicles, so it’s an attractive find for shoppers on a budget. Plus, the Corolla doesn’t sacrifice styling or fuel-efficiency, either. Altogether, these factors help make the Corolla the sixth-most popular in the U.S.

It’s likely a shock to no one that the Nissan Altima is the fifth-most popular car in America. After all, it’s a flagship sedan from one of the most trusted automakers in the world. What may be  surprising is that the Altima has such a loyal following in the South. Maybe Southerners are drawn to the model’s responsive handling or what critics describe as its no-nonsense reputation. Or perhaps they just like the awe-inspiring name, which derives from the Latin word meaning “a higher power.”

The Toyota Camry is one of the most well-liked cars in the nation, praised for its affordability, reliability, and all-around practicality. A true testament to the Camry’s widespread appeal is that the model isn’t the most common in any state despite being the fourth-most popular car in America. Instead of having a centralized hub of support, the Camry rather succeeds on true mass appeal: everywhere in the country, there’s bound to be someone who loves their Camry.

The Civic is Honda’s entry-level sedan, but that doesn’t mean the model cuts any corners. Its owners enjoy smart styling and unbeatable fuel-efficiency, which no doubt contribute to the vehicle’s broad appeal. The Honda Civic is the most common car in California, Pennsylvania, and Ohio—three of the seven most populous states in the country—which helps the model rise to number three on the list of the most popular cars in America.

Like the Chevy Silverado, Ford F-Series pickups zig while the rest of the nation’s most popular cars zag. Though it’s a bit pricier than most of the sedans on this list and can’t compete on fuel-efficiency, it does offer all the towing and cargo essentials customers look for in a pickup truck. Unsurprisingly, F-Series trucks are hugely popular in the heart of the country, and they’re the most common vehicle in a whopping nineteen states—seven more than the next closest car model. Plus, drivers will soon be able to purchase an all-electric Ford F-150, likely broadening the vehicle’s appeal even further.

The Honda Accord claims the top spot on the list of the most popular cars in America in 2022. What else needs to be said? Everyone knows the model’s strengths: a handsome design, tech-savvy interior, excellent gas mileage—all at great value. The Accord is practically ubiquitous on the East Coast, where it’s the most common vehicle in all but a few states, and it has plenty of supporters in the Pacific Northwest, too. All in all, more than 3% of all cars on the road in 2022 are Accords.

If you have any questions or comments about this article or would like to request the data, please contact [email protected] .